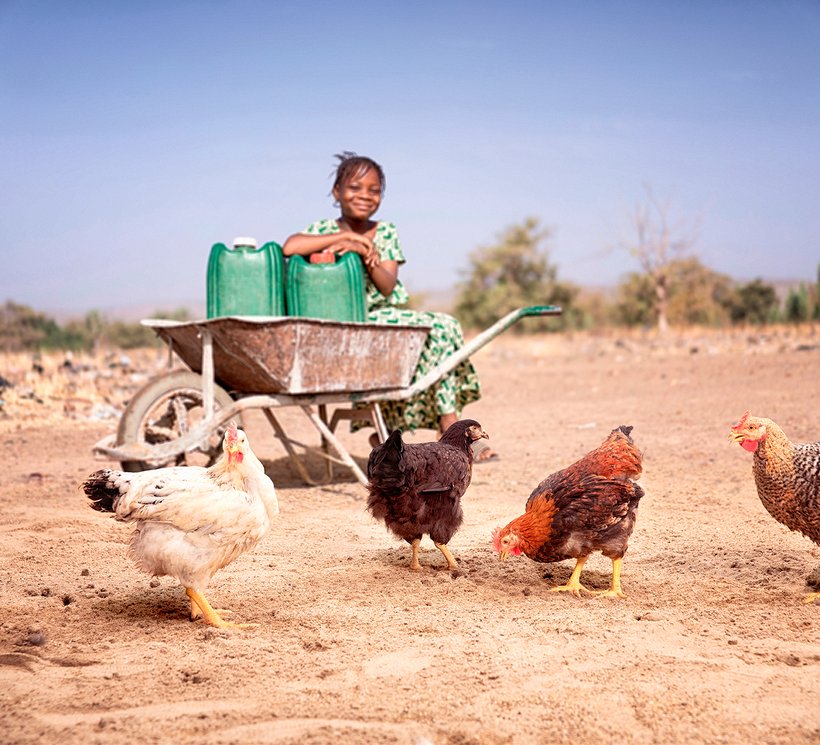 How to respond to global warming and summer heatstroke

The consequences of temperature rise for chickens

These temperature differences in relation to reference points can be marked differently depending on the geographical area. In France, in 2020, the difference from the average temperature between 1960 and 1990 was +2.3°C. Also, in France, the number of hot days (maximum temperatures above 25°C) is increasing, with an average of +6 days every 10 years. Finally, exceptional climatic events are becoming more and more frequent, with extreme temperatures that have never been exceeded in some countries and so-called "natural" disasters such as forest fires, floods or droughts.

This rise in global average temperatures is an important and worrying issue for breeding companies, especially in poultry. Birds are indeed very sensitive to challenging environmental events such as temperature increases, causing heat stress. More than the persistent heat over the summer, birds are more sensitive to the first heat strokes when they are not used to it and to the high temperature amplitudes between day and night. The first few days of summer are therefore generally the most dangerous. Up to 25°C, the risks of mortality are very low, but the drop in performance can be felt. Above 30°C, it is important to do everything possible to avoid a high mortality of the batch.

At SASSO, we have chosen to extend our selection scheme to Burkina Faso, in order to anticipate the performance problems linked to global warming. We are testing the performance of our pedigree lines in very hot conditions, where the average annual temperature is 28.1°C, i.e., 14.4°C higher than the average French temperature. In addition to this, there are the problems of raw materials for feed formulas, water quality and sanitary conditions. This natural and genetic selection allows us to identify the most resistant and efficient birds under extreme conditions. From one generation to the next, we are therefore able to remove from the genetic core the subjects that are most sensitive to temperature.

Even if genetics is presented as a positive response to climate change, zootechnics is no less important.

In order to ensure the good viability of the breeder flock, and their good performances, we must prepare as well as possible the transition to the summer season.

This preparation could start as early as the embryonic stage. Hulet R. et al (2007) show that high temperatures at the end of incubation (shell temperature at ~38.6°C) would seem to increase the heat tolerance of chicks, allowing them to resist heat stroke and obtain better weight performance. However, the tolerance levels of the embryo are still very poorly known, and we know that embryos tolerate lack of heat more than excess heat. It is therefore necessary to remain vigilant on the instructions of incubation and hatching.

The adaptation of a flock to the summer temperatures and its heat strokes begins with the first phase of rearing period of the chicks. In order to improve the thermo-resistance of the chicks, whether they are broilers or breeders, the ambient temperatures can be 1.5 to 2°C higher than the average set temperatures. This experience from the first days of age will be registered by the organism, and the flock will be less affected by sudden hot temperatures. This is what we are doing by starting batches of breeding chicks, or broilers, in Burkina Faso.

In Burkina Faso, our females breeders have shown a strong adaptation response to their environment. In spite of temperatures close to 40°C during the hot and dry period, and nights that were not very refreshing (25°C at least), we did not observe any distress related to thermal stress: constant panting to evacuate heat (respiratory frequency that could be multiplied up to 10: we speak of hyperventilation), open wings and raised back feathers that allowed them to maximize the contact surfaces between the skin and air currents related to ventilation for a better comfort, and a strongly reduced activity at the hottest hours of the day. These adaptations are partly possible thanks to the layout of the buildings, which allows the descent of fresh air directly to the animals.

We often talk about temperatures, forgetting the relative humidity (mainly in closed buildings). In fact, thermal stress in poultry will be caused by a combination of the 2 parameters mentioned.

Here is a graph showing the comfort zone for poultry (thermo-neutral zone) considering temperature and humidity. Of course, this is only an illustration. We know that comfort temperatures depend on the age of the birds, their feathering and their growth.

It is important to understand that in hot weather, there is no point in overloading the environment with water via pad cooling or misting systems, which would then increase the humidity in the building (if the humidity level in the geographical area is already highly saturated, for example). Better to use ventilation systems with devices to increase air velocity to lower the building's perceived temperature and relative humidity or cool the incoming air via an air conditioner.

It is essential to adapt the activity of the animals and the time of feeding in case of high heat. At the hottest times of the day, it is important to ensure that the birds are neither active nor in a digestion phase (the latter increases thermogenesis generating heat in the body, which can create heat stress). To ensure that the crop is completely empty at these hot times, and to avoid encouraging the birds to become active, it is important to shift the feeding times to the cooler hours of the morning, and once the heat peak is reached, to the afternoon. It is possible to change the light program in exceptional cases to allow the birds to feed more easily. In some countries, where legislation allows, midnight feeding authorizes birds to consume and digest during the cooler hours of the day.

In case of extreme temperatures (heat wave days), the daily ration can be divided up to 50% to anticipate a potential high mortality on the flock. It is possible that the performance of the flock is degraded following these half-rations: drop in egg laying, drop in egg size, slight weight loss. On the other hand, this is not an irreversible phenomenon, which will allow you, afterwards, to recover your initial performance. Thus, as soon as the heat stroke is over, it is possible to restimulate the birds at a rate of 10g/d. 9 times out of 10, you will see your size and your egg laying return to normal. On the other hand, you may occasionally see weight gain rather than a return to the original performance. It is important to control mortality during heat stroke, sometimes at the expense of performance, for a few days.

Choose a more energetic feed that is less rich in protein. A calorific feed will allow to reduce the consumption of the animals, while bringing the essential nutrients. A presentation of the feed in the form of pellets will also facilitate ingestion by increasing the energy density of the feed. Limit carbohydrates and favor lipids to reduce heat production. Finally, promote the availability of antioxidants (Vitamin C, E), calcium bicarbonate, vitamin D and electrolytes.

As we have seen above, panting is an adaptation to warm temperatures to decrease body temperature. Through this high respiratory rate, birds will eliminate more CO2, thus decreasing the CO2 blood concentration and thus increasing the blood pH. In order to counteract this phenomenon, birds release bicarbonate ions and electrolytes (K, Na) via their droppings. This electrolyte balance is thus disturbed and generates a water loss. The animals become dehydrated much faster and have great difficulty in lowering their body temperature.

The food being less consumed in situations of strong heat, the contribution in electrolytes is thus limited, not allowing to find a sufficient and fast electrolyte balance.

It is therefore important to offer sufficient access to fresh water (easily accessible water points at any time of the day), to encourage water consumption (litter condition may be degraded). Offering fresh water to the animals will oblige you to purge your pipes, thus avoiding the phenomenon of stagnant hot water, favorable to bacterial development (creation of biofilms).

As already mentioned, it is strongly recommended to bring via drinking water a solution rich in electrolytes to avoid these phenomena of dehydration, in addition to antioxidants.

Finally, the fattening condition is a key factor to prepare a batch for summer temperatures. While we will try to make more fat available for burning on so-called "winter" flocks to compensate for the lack of heat, we will try to avoid excess fat on so-called "summer" batch. An excess of fat will indeed result in an increase in body heat due to the difficulty of flush this created heat out. Increased blood flow to cool the body at the surface will weaken the heart of poultry, just as it does in humans, who are already under heat stress. In case of heat stroke, the most sensitive animals are the fattest ones. It is therefore essential not to manage your breeding flocks in the same way in winter and in summer.

As you can see, summer heat waves cannot be prepared for a few days before the first heat stroke. From the first day of age, we can do everything possible to prepare our poultry for high temperatures and adapt their growth and metabolism to their future needs. Finally, even if the economic losses can be perceived, it is important to do everything to offset the mortality of the first heat strokes, to the detriment of the zootechnical performance of the batch. The latter being reversible, the economic impact is then less.

This heat stress sensitizes the chicks, making them more susceptible to disease and infection. This is another good reason to make every effort to keep our birds comfortable during these complicated times.

How to properly manage the weight of your future breeders

From their first week of life, the farmer must control the growth of the future breeders to ensure a good body composition. In this article, you will find our advice on how to manage the weight of fu…

Once again, Hendrix Genetics participated to the annual tradeshow SPACE held in Rennes, France, from September 13th to 15th. This event is the not-to miss meeting for all the livestock industry in Fr…

SASSO returns to the Ecuadorian market

For more than 15 years and the first significant avian influenza crisis in France, SASSO was no longer able to supply its customers in Ecuador. After having restarted the process in 2020, we finally …